For 20 years Laurent Ballesta dreamed only of exploring the depths of the Mediterranean Sea. In July 2019, the biologist, photographer and extreme diver, along with three companions, boarded a strange-looking steel vessel. Sometimes confined in a 5-square-metre pressurised habitat on the surface and at others equipped with diving suits and rebreathers and left to their own devices in the twilight zone, they endured a total of 28 days in a helium-rich atmosphere 13 times denser than the air at the surface. At depths of more than 100 metres, the aquanauts discovered a world that even the sun’s rays struggle to reach and yet that supports some of the world’s most beautiful ecosystems. 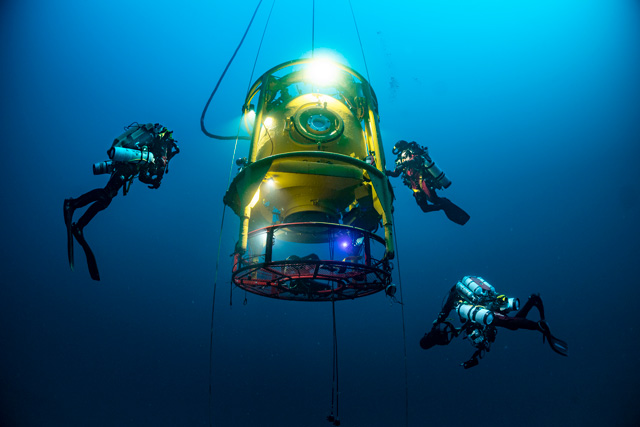 “The Mediterranean is far from being a dead sea. We went to investigate – its heart is still beating.”

A.: How would you describe ‘Planet Mediterranean’?

B.: Like in my dreams! But I’m totally biased; I talk like a man in love. Plus I’ve been dreaming of this mission for almost 20 years, so I had plenty of time to pinpoint the potential dive sites. During the Gombessa V mission, at a depth of 135 metres, we entered a stunning, peaceful and pristine world that had never been visited before. I feel as if I’ve never been so far without leaving home – in the Mediterranean, right near a built-up coastline!

Is the Mediterranean a wounded sea or one bursting with life?

It isn’t what it was two or three hundred years ago, that’s clear. We hear a lot about it being a polluted sea, a sea of plastic, affected by mass tourism and shipping. That’s true, particularly since it’s almost enclosed by land. But it’s far from being a dead sea! We went to investigate – its heart is still beating. It holds many oases. It’s just that they’re down deep rather than close to the surface.

At what point does one enter this other Mediterranean, and where does it end?

The twilight zone begins at a depth of 50 metres (at least in the waters off the French Riviera). Above that, there is too much light and below 120 metres there isn’t enough. That dimly-lit band is where coral reefs grow. That’s too generic a term in my opinion because you see forests of red sea fans and black coral, fields of sea cabbages and sponges that thrive in low-light conditions. We made 3D models of six coralligenous reefs using photogrammetry as a record of the amazingly diverse undersea landscapes. Beyond 120 metres, we found fossilised coralligenous reefs, relics of prehistoric times when the sea level was much lower. Those ancient reefs are an incredible sight – holey, hollowed out and not so teeming with life.

Your adventure is reminiscent of a space mission: meticulous preparation, scientific assignments, physical and mental commitment, confinement, extra-vehicular excursions and a constant focus on safety.

We joked – while being fully aware that we’re nowhere near this hero’s league – that [French astronaut] Thomas Pesquet only did one spacewalk after months in space. Whereas we went out twice a day! I hope he has a good sense of humour… But that’s as far as the comparison goes. There is nothing more difficult than the astronaut selection process. Having said that, it’s true that there are close links between deep diving and space exploration – two worlds on the threshold of the unknown. The space capsule is at zero pressure. To leave it, the astronauts go through a stepped repressurisation process on their return to Earth. For us it’s the opposite: the pressure of our diving capsule is maintained at thirteen times higher than sea-level atmospheric pressure, and we had to spend four days in decompression before coming out. To continue the metaphor from a technical point of view, our bathyal station would be closer to a Soyuz spacecraft than the ISS! Thank goodness this contraption from another age was in the hands of engineers from the French professional diving institute (INPP), who knew it inside out, because there were a few leaks… And we brought in 23 cables requiring 23 holes, which made their job much more complicated!

Did you discover any unknown species?

Nearly every day, I would return to the station with an image of a creature that had never been photographed alive. This was the case with the parrot seaperch, the copper-coloured cod, the four-spot megrim and various species of crab. Or previously unrecorded behaviours, such as the courtship display of moray eels, and the mating and egg-laying of the veined squid. Images of this biodiversity are invaluable both aesthetically and scientifically. When you’re in the depths of Papua New Guinea or under the Antarctic ice sheet, discovering new species is less surprising. But it’s crazy that whole sections of the Mediterranean are still unknown! How many thousands of years have fishermen, divers and coastal residents been looking at it?!

Are you the first divers to have performed such a feat?

We used the same techniques practised in industrial saturation diving since the 1970s, except that the diver is usually connected to the station by a cable to carry out underwater engineering work. Our approach is very different, since it’s about exploration, which means that we have to be able to move away from the diving bell to freely explore the environment. To do this we used electronic rebreathers which gave us enough breathing gas for three or four hours. It calls for great self-reliance on the part of the divers, you have to look out for each other, and at any one time you have to ask yourself if you’d be able to return to the diving bell in an emergency. At the surface, on the support barge, around 20 people were ensuring our safety 24/7.

What was one of the most challenging aspects?

You might imagine that it’s difficult for four people to live cooped up in a 5-square-metre space for a month. It’s very confined. But we were so tired after our dives that we slept a lot. And I had chosen my companions very carefully, not just because they were excellent divers but also for their human qualities. The difficulty lay in moving around in an atmosphere made up of 97% helium, a lightweight gas which makes it easy to breathe and prevents nitrogen narcosis. One of the drawbacks is that the voice becomes inaudible at very high pressures: we would have been deaf if we hadn’t worn headsets with microphones so our voices could be processed by a software program. But the worst thing about breathing helium is the cold. It’s not an insulating gas like air, which enables the body to manage 80-degree temperature differences. When you breathe helium, 3 to 4 degrees is the maximum! We were diving in water of 14 degrees Celsius. It’s not the Antarctic where the water is minus 1.8 degrees, but we were chilled to the bone as if we’d been under pack ice. During a three- to four-hour dive, the cold gets to you from within. Every time you breathe out and breathe in again, you lose body heat.

(*the bathyal zone refers to the layer of deep ocean above the abyssal zone).

“The Mediterranean is a climate change hotspot because it is heating up 20% faster than the rest of the oceans.” 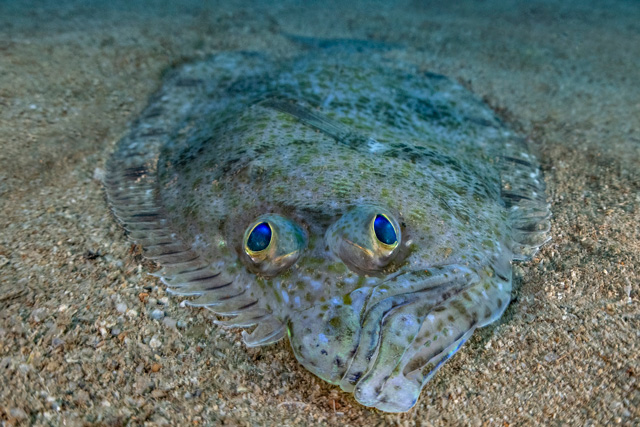