Once again this year the members of the Ocean and Climate Platform have won decisive victories in the theatre of international negotiations. Since 2014 their plan of attack has been to make the ocean an essential issue in global climate policies. Their strategy is based on the pillars of science as much as on the outstanding commitment of a head of state. 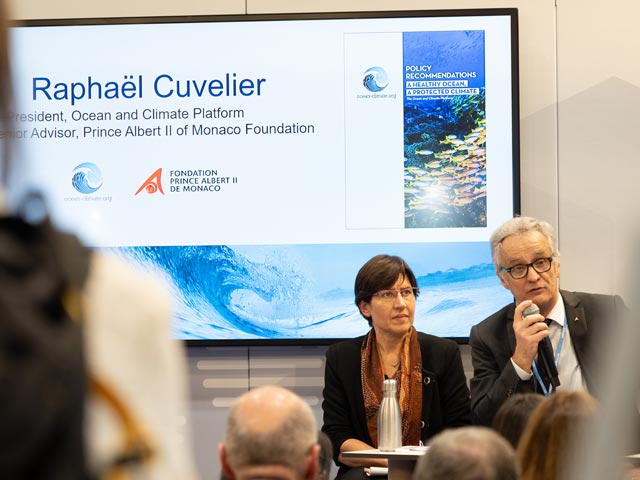 Act I: The Paris Conference

The ocean is still largely overlooked in international climate negotiations. Experts and decision-makers from around the world, brought together as part of the Ocean and Climate Platform and supported by the Prince Albert II of Monaco Foundation, strive to put their point across at COP21. How can the largest area on the planet be neglected any longer when climate change is involved? The prospect of international mobilisation in support of the climate strengthens the strategy of the group, which numbers around 85 international organisations today. Members of the network launch the ‘Ocean for Climate’ petition, which attracts over 30,000 signatures. The ocean is thrust centre stage at the climate conference, establishing itself as an actor whose power to influence the drama has been underestimated. As 195 states adopt the Paris Agreement, 22 sign the Because The Ocean declaration initiated by Monaco and Chile. The declaration’s member states (now totalling 39), including Monaco, immediately call on the IPCC to produce a Special Report on the Ocean.

The Because The Ocean declaration, along with the joint commitment of the Prince Albert II of Monaco Foundation and the Government of the Principality, helps influence the UN Intergovernmental Panel on Climate Change (IPCC). Two years after their first meeting in Monaco, the experts complete their Special Report on the Ocean and the Cryosphere, a major publication (1,170 pages) at the cutting edge of research. In 30 years of climate change assessment, it is the very first IPCC report devoted to the impact of climate change on coastal and marine ecosystems. At the invitation of HRH Prince Albert II, the 195 member countries of the IPCC visit the Principality to approve and present the conclusions of the Report, making Monaco a climate action hotspot.

Climatologists agree on the acceleration of phenomena such as the warming, acidification and deoxygenation of marine waters, the rise in sea level and the degradation of marine ecosystems and frozen regions. Some disturbances are already irreversible, others signal the need to anticipate the impacts on populations, in particular that of rising waters. In total, more than a quarter of the world’s inhabitants are directly threatened by the consequences of climate change on the ocean and the cryosphere. “The open sea, the Arctic, the Antarctic and the high mountains may seem far away to many people,” says Hoesung Lee, Chair of the IPCC, at the presentation. “But we depend on them and are influenced by them directly and indirectly in many ways.” Scientists reveal that the world is on track for a temperature rise of over 3°C. The only possible solution: reducing CO2 emissions as quickly as possible.

HRH Prince Albert II of Monaco attends the “Blue COP”, the Madrid Climate Conference which brings together 196 Parties. The ocean is at the heart of the Sovereign’s address. Following him, well established in its advocacy role and in close liaison with the Prince Albert II of Monaco Foundation, the Ocean and Climate Platform present a new appeal: ‘A healthy ocean, a protected climate’. It also contributes to the Ocean for Climate report produced by Because the Ocean and written for governments eager to honour their national climate commitments. The guide sets out a series of concrete measures (ocean-based renewable energies, shipping, adaptation policy and ecosystem conservation) to help countries in their efforts to protect the ocean. As international conventions are rarely binding, there is an urgent need to build a positive system. Although the Madrid Conference does not enable the Parties to fulfil their ambitions in the fight against climate change, the final decision recognises, for the first time, the importance of the ocean and launches a process aimed at strengthening the links between climate and ocean policies and strategies – an outcome that the Because The Ocean initiative has been pursuing for several years. Informed deeply by science, the Ocean and Climate Platform continues its commitment to support countries with integrating the ocean into their climate policy.

“Climate policies draw from climate science that initially focused on physics and chemistry. Today our priority is to integrate biology into the heart of decision-making for the simple reason that ocean biology plays a central role in climate”, explains Romain Troublé, President of the Platform and Executive Director of the Tara Ocean Foundation. The Platform therefore incorporates this new understanding of the ocean as ecosystem into the ocean–climate relationship. “The Convention on Biological Diversity pays particular attention to terrestrial ecosystems,” highlights Raphaël Cuvelier, Vice-President of the Ocean and Climate Platform and an advisor within the Foundation. “The ocean and climate are rarely taken into account. We are working to build a bridge so that climate experts can communicate with biodiversity experts. The Platform is there to play an important role in this breaking down of barriers.” The new plea it will make to the highest authorities and future COPs, in particular the Biological Diversity and Climate conventions, has several urgent strands, including the effectiveness of marine protected areas and the thorny issue of blue carbon, which still needs to be scrutinised by science. The performance is not over.

Thanks to the participation of around 85 members, the Ocean and Climate Platform forms an interface between science and politics, and promotes reflection and exchange between the scientific community, civil society and political decision-makers. The alliance brings together, around shared values, research institutes, non-governmental organisations, higher education establishments, aquariums, representatives of the private sector and French and international institutions.